We don’t ‘do’ ready meals in this house.

I like to cook a proper, home made meal for my children and I’m lucky enough to have the time and resources to do that for them on an almost daily basis.

Don’t get me wrong – my children love things like fish fingers and nuggets and I do give them meals like that, but I love to cook.

Sometimes though, I don’t feel like cooking and we will have a takeaway or a create your own pizza. Once, I bought a pre-packed ‘Indian Takeaway for Two’ from the supermarket. It was AWFUL. Barely any taste to it and ‘chicken’ that tasted like rubber put me off for life! No more microwave curries for me!

Then one day I received an email from a lady asking me if I’d be interested in reviewing Mindi’s ready meals.

The meals are gluten free, they are made with all natural ingredients and the recipes have been passed down through the generations. They sounded like they would change my view on rubber ready meals if they were all they were cracked up to be, so I agreed to review them. 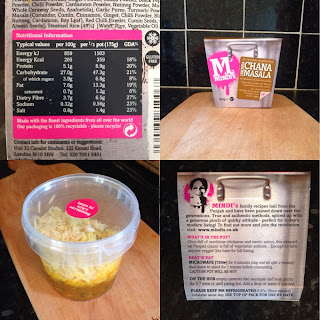 The packaging on Mindi’s is really modern, funky and aesthetically pleasing.

The pot itself is sturdy, easy to open (no more melted plastic bits), and you can see what you’re buying while it’s still in the shop. It already looks appealing.

The Chana Masala was lovely even though I don’t usually go for any kind of meal without meat in it. It was filling and it didn’t feel like there was anything missing by having no meat.
The Fiery Chicken Masala was far too spicy for me to eat but my husband really enjoyed it. He’s a fan of Madras though, whereas I’m a Balti kinda gal!
The Chicken Korma was a hit with the boys (aged 3 and 6) who shared one between them for lunch and with a nan bread on the side there was enough for the two of them. The only thing I would say about the Korma is that it’s heavy on coriander so if you’re not keen on that I doubt you’d like the Korma. Fortunately for me, I love coriander!
My favourite ready meal from Mindi’s though has to be the Chicken Tikka. It’s creamy but still has a kick, the chicken tastes like actual chicken rather than the awful tasting stuff you get in other prepacked meals, it’s yummy and it’s filling. Definitely my favourite by far.
You can buy Mindi’s from Booth’s supermarkets and Mindi’s have a handy little search facility on their site to locate your nearest one. Our nearest Booth’s is actually quite a distance away so that’s a little disappointing for me but with any luck Mindi’s will grow and begin stocking in more and more shops!
(Dear Mindi’s, your ready meals are on my Christmas list!)
I highly recommend Mindi’s ready meals for a quick lunch or an alternative to sandwiches for work – really tasty and they have given me some faith in ready meals!

This site uses Akismet to reduce spam. Learn how your comment data is processed.